Ahead of Your Time? So Was The Original Office Cubicle 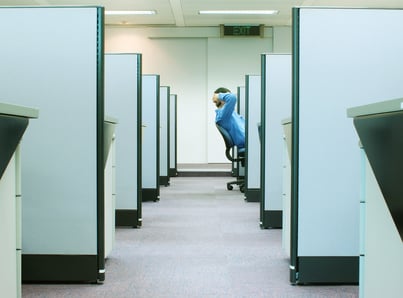 The prototype of today’s flexible office environment that morphs, as needed, between collaborative and private, actually dates to 1968. Designer Robert Probst developed a modular, reconfigurable workstation in the mid-60’s – a design which became the now-despised office cubicle. Probst’s early cubicles were created as a system of adjustable wall panels, modular storage, and desk surfaces. They were intended to give workers the freedom to customize their space as they desired, with panels that could be angled outward for collaboration, or angled inward for semi-privacy. So why did Probst’s creation become isolating, dehumanizing “cubicle farms?” As explained in “Business Insider,” companies’ cost-cutting measures forced Probst’s flexible design into rigid homogeneous layouts. The visionary inventor came to loathe the corruption of his original intent, calling cubicles “rat-mazes.”

Probst died in 2000, but if he were alive today, he’d be amazed by the explosive growth in demand for modular workspaces that can be quickly switched between private and collaborative space. Such companies as Swift Space, with their “Power of One” program for individualizing workplaces, are at the leading edge of this second wave of Probst’s vision. He’d be proud to know he was just a little ahead of his time.