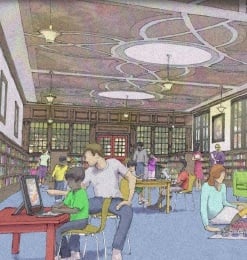 The Enoch Pratt Free Library is the public library that serves Baltimore city and a portion of the surrounding area. A renovation was needed so that they could better serve over 20 branches and several mobile facilities.

To prepare for the renovation the library contracted with Jones Lang LaSalle and with their help leased a warehouse space in South Baltimore that would be the library’s temporary central warehouse. The library was offered shelving that was no longer in use by the Boston Public Library and others in order to help with this project. No new shelving needed to be purchased, but over 2,000 sections of shelving needed to be dismantled and relocated from surrounding states.

NOS was brought in to manage the process of moving and installing the used shelving to the newly leased warehouse space.

Winter was right around the corner and there had been unprecedented snowstorms early in the season in Boston where a majority of the used shelving was stored. In fact, the shelving that was to be shipped to Baltimore was in two separate locations, one in a regularly plowed area and another in Downtown Boston where permits were required for street access and there was nowhere to put the snow! An additional challenge was that the leased space where the shelving was to be installed had floor variances of up to 12 inches.

In addition to NOS, key roles were played by the Enoch Pratt Public Library, Systematics, and Jones Lang LaSalle. The facilities team for the Enoch Pratt Public Library has experience with this type of project and knew the best course of action was to bring in storage professionals and let them take the lead in addressing the different challenges at hand. The shelving at the Boston Public Library (about 50% of the shelving) had to be removed within a week of contracting with NOS. To achieve this goal and to beat the snow that was piling up, our sister company Systematics in Boston was brought in to dismantle and relocate the shelving to the new location in Baltimore.

As for the shelving in the other Boston location, unplowed snow was everywhere…and most of the shelving was still standing…and some still had books on it! The books needed to be boxed and the shelves needed to be dismantled. Due to the snowy conditions throughout that winter this part of the project needed to wait until springtime at which time Systematics dismantled approximately 1,500 sections of shelving and shipped them to Baltimore.

The temporary warehouse space in Baltimore had some unique challenges including a 12” floor variance. While this is a difficult challenge, it is one NOS has dealt with multiple times before, and in the end over 6 linear miles of shelving was installed. Enoch Pratt Library now has a fully operational and functional space for their collection while the main library is being renovated.

The opportunity to work on a large project with multiple parties showed how important good communication and an experienced project management team can lead to success.

“John was great in allowing us to simply do our work once the plans were in place. The lines of communication were always open, and any field adjustments were made quickly and decisively with buy-in from all parties. “ – Jerry Kovack, Storage Specialist